In the past couple of years, Okta Louge shared the stage with Neil Young and Portugal. The Man, were invited to prestigious South by Southwest in Texas and were given awards for their video clips at much lauded film festivals. It is therefore rather legitimate to state that these four young guys are not your ordinary Rock band. In fact, they are even sounding like a melange of the aforementioned artists. As unlikely as that must sound.

On three albums so far, Benno Herz, Robert Herz, Philip Meloi and Max Schneider evoke a holistic and original sound, much closer to the American west coast than to the Hessian countryside. Retro and a wee bit vintage, but never as a means to the end, they are a far cry from a bunch of stuck nostalgics. They breathe zeitgeist, feel progressive, sound cosmopolitan, feed off an enviable weightlessless – and have carved their very own niche within Indie music with a highly recognizable signature sound, harmonies to throttle your neighbor for and a huge piece of their very souls.

After circling the world with their bands, after playing gigs in Los Angeles or at Hippie central Burg Herzberg, Okta Logue are about to release their fourth record. And with the teaser “Chocolate &amp; Soda” still ringing in our ears, light as a feather, brimful of Soul and charmingly pensive, one thing becomes apparent: Next year, this band will rewrite German Indie history. 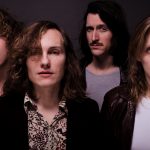