Shybits is a Berlin based trio made up of friends Liam (from UK), Piero (from Italy) and Megan (from South Africa).
The band have been playing their well-crafted mix of post punk / catchy new-wave-pop since 2018. That same year they signed to Duchess Box Records with their first EP called ‘Idiot Like You’.
After releasing a series of singles they followed up with their debut album ‘Body Lotion’ in February 2022. The feel of the album is reminiscent of post punk and 90s alt-rock and has been described as “Beach Boys suntan nostalgia meets Beatlesque vocal harmonies”.
The band have been making a name for themselves in Berlin, leading them to play tours and festivals throughout Germany and Europe and supporting acts like Gurr, Yard Act, Gustaf,We Were Promised Jetpacks, Turnover and Automatic. In addition they’ve been hosted to perform on the cult TV show Rockpalast, as well as on the American NPR World Cafè Show.
They’re currently in the studio working on new material and have more shows lined up with Art Brut. 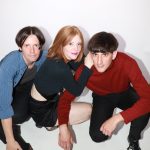