Los Angeles lives under the constant gaze of the Western world, and its denizens are just as apt to view their lives through that same digital lens. It’s a panopticon, a chamber of mirrors. And it’s in this city of sunshine and surveillance that punk quartet The Paranoyds channeled their revelry and revulsion into their debut album Carnage Bargain—a raucous blend of garage rock grit, new wave swagger, classic horror film soundtrack campiness, and a myriad of other left-of-center influences.

It’s ironic that the band’s moniker winds up being an apt summary of the band’s general outlook on technology and modern culture given that The Paranoyds’ humble beginnings can be traced back to a friendship forged between Staz Lindes (bass/vocals) and Laila Hashemi (keys/vocals) over Myspace in their early teens. Bonded by a shared interest in local underground music, the pair eventually moved their online friendship into the real world. Laila’s childhood friend Lexi was brought into the fold and the first vestiges of The Paranoyds began to take shape. “We would all go to our friends’ shows and it hit us that we could start a band and play shows too,” Funston says. With the addition of drummer David Ruiz in 2015, the band found the perfect personnel for their sonic balance of jubilant energy and foreboding undercurrents. Carnage Bargain captures this chemistry perfectly—channeling the genre-mashing weirdness of guitar-and-keyboard provocateurs like The Intelligence on tracks like “Laundry,” the fever-dream kitsch of early B-52s on “Ratboy,” krautrock’s motorik groove on “Hungry Sam”, and the beguiling pop of Blondie on the sweet-and-salty highlight “Courtney.”

Carnage Bargain opens with the sound of an alarm—a squealing two-note guitar line of alternating half-tones that pierces the air like a siren—before a build-up on the drums leads into “Face First.” As the band bangs out their hybrid of ear-worm melodies, econo punk, and off-kilter skronk, guitarist/vocalist Lexi Funston croons about watching other people’s private lives unfold on our phones. This critique of social media voyeurism and narcissism may seem like the musings of a bunch of luddites, but for The Paranoyds, it’s more of an honest examination of a harrowing inevitability in our day and age.

Title track “Carnage Bargain” is a perfect example of the band delivering scathing lyrical observations under the guise of a quirky pop hook. “People want things all the time—there seems to be a constant manic need of consuming now more so than ever. ‘Carnage Bargain’ is about the people higher up wanting to get all this evil work done at a wholesale price,” Lindes says. Against a backdrop of big guitar chords, a syncopated rhythm section, and old school organ lines, Lindes belts out the rousing chorus “They wanna get a carnage bargain / I want to pick up garbage.” It’s such a triumphant chorus that it’s easy to forget the dire warning embedded in the song. “The concept is pretty thematic of the whole album…it’s so easy to be things that the ‘media’ and ‘corporations’ want you to be—especially now that we all have these mini, smart-ass computers in our hands from the age of like eight to eighty. It’s easy for companies to sell you stuff or even an idea, without you even realizing what’s going on.”

This notion of rejecting the status quo and carving out your own destiny is perhaps most evident on the lead single “Girlfriend Degree,” a mid-tempo stomper of clap-along beats, fuzz guitar leads, and call-to-arms vocals described by the band as an ode to “being a badass woman who’s taking time to make sure she’s doing things for herself.” The band may indeed be paranoid, but they offer a solution to our modern ills through the simple act of being an inspiring, independent, and unflappable musical force. 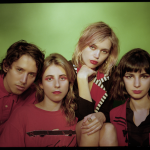 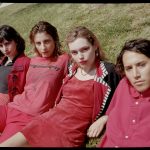