Besides Heavy Metal and Punk, the western german Ruhr Area does not shine too bright musically. But searching hard enough will let you find some musical rarities even between Duisburg and Dortmund, whose output doesn’t have anything in common with the realms of omnipresent trash.

One of these rarities is Nils Herzogenrath from Essen. Indie-Connoisseurs know him as part of the psychedelic pop wonder Ωracles. In the lo-fi and shoegaze scene he is better known for his solo alias Vomit Heat. Everyone familiar with both projects might think there are (at least) two hearts beating in his chest. Additionally putting his neo-Krautrock band Transport in the mix shows, there is a bigger concept at work – fusing experimentalism, kraut and psychedelic, no fear of melodies and a heart for noise. 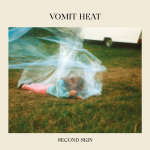