"Bringing the dirt of the street to the stage" is how New York musician Alan Vega, who died in July 2016, once described the idea of the live performances of his duo Suicide. Anyone who has ever seen the Munich band FRIENDS OF GAS live will be able to confirm that these five musicians also bring all the dirt from outside onto the stage. Or even a burning forest!
FRIENDS OF GAS are a tough confrontation with the present and great art in the best of all senses: as a critique of the conditions in which man is a humiliated, enslaved, abandoned and despised being. Their merciless music shows us certainty that there are other people out there who are exposed to the same madness and contradictions as we are.

FRIENDS OF GAS have found a way to channel all that pressure as a collective in their dark basement-music between Noise- and Krautrock. A sound between Faust Nord and Faust Süd, Captain Beefheart's Magic Band, Kim Gordon and Lydia Lunch. Between Slint and Unwound. GG Allin rides a Crazy Horse.

KEIN WETTER is the name of the second studio album of this exceptional band, of which we of course wish they weren't an exceptional band at all: An alliance of outsiders who go on stage or to the studio together as anti-heroes and suddenly blow everything to rubble in superhero-style.

On their new double album they sound as great as never before. This surely has something to do with their producer Olaf O.P.A.L.(The Notwist, International Music) who, as a fan from the very beginning, managed to capture the band in the studio incredibly well - as far as you can capture this group in the studio at all. The singing of Nina Walser alone is so overwhelming that sound engineers immediately lose the jack cable.

She chants "Kapital oder Kapitulieren (capital or capitulation)" loudly in the Karl Marx-Blues "Schrumpfen (Shrinking)" in which we all remain unarmed in the sense of a revolution that does not want to take place. The music is all the more dangerous for that. The texts on KEIN WETTER are always short and concise. Repetitive slogans from life and stories about the oddities of life. In the punk rock-rammer "Blaiberg", for example, the band refers to the work of Walter Aue, who in his book "Blaiberg, oh Blaiberg" from 1970 dealt with the second successful heart transplant and collaged the media coverage of the time between headlines and calendar motto romanticism in it: "Und Tag für Tag ist die Sonne die Gleiche. (And day after day the sun is the same.)".

Descriptions of the weather run through this album like its stoic bass lines. In "Graue Luft (Grey Air)" over the gloomy "Felder (Fields)" and into the "Stechpalmenwald (Holly Forest)". Whereby the holly forest actually only exists in the literature of Peter Stephan Jungk. He writes little stories about the big losers of the dream factory: "Our love is a monster bred in Hollywood". "Im Abwasser schwimmen gehen und nicht an die verbale Sprache glauben (Swimming in the sewage and not believing in verbal language)", is what the nihilistic "Abwasser (Sewage)"-disco with its rock breaks finally says. FRIENDS OF GAS consistently refuse to participate in any new delusions. Instead "leere, liebe Leere... (empty, dear emptiness...)".

Instrumentally, they sometimes sound like a hard rock variation of Khruangbin, for example in the song "Teilchen (Particles)", in which Nina Walser laments the inner and outer decay on behalf of the whole band: "Alles ist von schlechter Qualität. Wir gehen von Bana nach Lität (...) Es war einmal der Mensch – Teilchen und Anti-Teilchen (Everything is of bad quality. We go from bana to lity (...) Once upon a time there was man - particles and anti-particles.)"

"Selber Keine (None of them)" is the title of the concluding 10-minute final piece, in which we, as listeners, can make up our own minds about who or what this band is, for God's sake, in the end. But what we know after the first listening session of KEIN WETTER is that they are the most powerful German-speaking rock band at the moment. 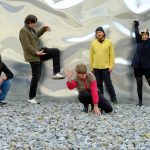 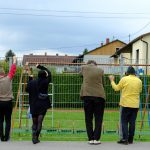 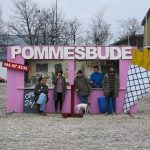 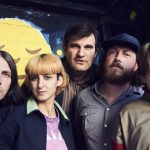 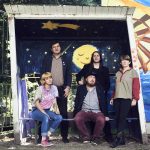 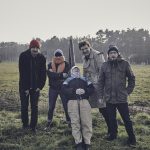