Who is this Luis Ake guy? Does anyone know? Does he even know himself? And does it even matter at all? Is it not already fully satisfactory to fall under the spell of this mysterious man and his melodic dream world? A world he creates somewhere between bass and falsetto, with pathos and no fear of being vulnerable, of expressing new forms of masculinity, whatever they may be.

A world where major feels are absolutely fine, where the inner world is welcome to crawl towards the sun and show itself. Or is all of this possibly not true at all? Or perhaps even – completely irrelevant?

Ever since Ake's 2019 debut "Bitte Lass Mich Frei" recalibrated what German pop music could be, nothing has been the same. He moves through the imagined boundaries between genres, crossing them and connecting the unexpected as if it was an easy thing to do. When Ake sings, it sounds strangely familiar, but at the same time outrageously new and futuristic. Synth Pop and Dark Wave meet Italo Disco and NDW, Pet Shop Boys dance with Enigma, German working class legend Herbert Grönemeyer shakes hands with OMD, and H. P. Baxxter towers above it all and fires up a trance storm.

With that inimitably versatile voice and a penchant for grand feelings and even grander gestures, coupled with self-assured vulnerability – but never without a knowing wink – he positions himself against any trend and sets, yes, we have to put it bluntly, his own instead. "I'm more inspired by the things I hate than the things I love," he says, and you envision him right in front of your eyes, leaning against his vintage Porsche and taking a drag on a cigarette, eyes hidden behind big sunglasses, the expansion of the blue sky behind him, a few fluffy clouds passing by. Yes, all the other artists on Spotify are too one-dimensional for him, but he's only really critical of himself: "For me, pop music is an art form that's not exclusively about music." No, pop is more than that for Ake, so much more.

One thing is certain: with this guy, you are not ever in danger of possibly getting bored. There is no method, no approach, no avenue Ake uses twice. It is rather part of the DNA of this idea of Luis Ake, this creation of his likeness to challenge himself again and again, to create himself anew, to leave the boundaries of one’s own imagination. Luis Ake is not an artist, Luis Ake is an ongoing and always re-emerging new work of art. A slick cis-man who seems almost like a caricature of toxic masculinity, yet shattering this very caricature into pieces again and again.

So, what now? He is currently living as a nomad somewhere between France and Berlin and wherever he feels like going next, his only earthly possessions whatever fits into the trunk of the aforementioned Porsche. He is neither interested in money, nor in fame, no, in the tradition of great role models from Wilde and Huysmans to Baudelaire and ultimately Scooter, he's interested in L'art pour L'art - or rather pop culture for the sake of pop culture. This is more than music, more than simply a pose, more than an attitude. No, Luis Ake doesn't create pop music, he is pop culture in a nutshell. Like a hall of mirrors that magnifies and distorts our limbs and through that shows us the truth, the ugly and the pretty, Ake is a mirror of society, revealing, as it were, with ruthlessness and infinite love, the highest heights and deepest depths of our existence. With his new album "Liebe" Luis Ake enters the next level of abstraction. He steps even further away from himself than before, removes the personal from the performance and in doing so manages to take us all closer to ourselves, piece by piece, song by song, line by line. And that, after all, is the greatest gift. 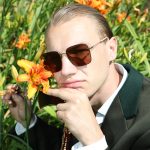 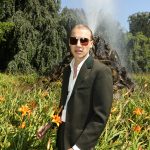 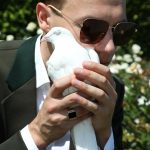 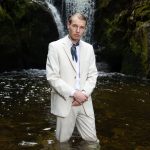